In progress: a post about researching and georeferencing fabulous historical basemaps. (Really… who can resist a 1942 map entitled “The Good Neighbor Pictorial Map of South America”?) But for now: a bit of experimentation with composite maps. Before moving on to keying off of other datasets, there is more to do with putting together my own data differently.

CartoDB allows users to merge datasets and also to layer multiple datasets. This screengrab comes from a map that is not very pretty (yet), but informative nonetheless. 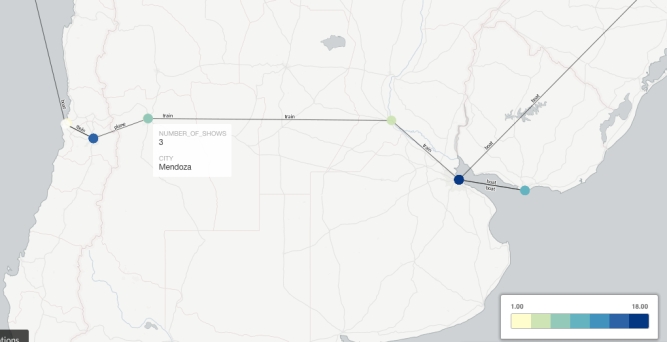 This map consists of two layers. The farther-back layer is drawn from a dataset with the routes converted to GeoJSON linestrings. Here each string is labeled with the type of transportation. Right now, these are simply represented as direct lines, although in the future they could be arced, or even made to run along a suggested route (so that boats would not be, for example, running on land).

The second layer is based on several tables which have been merged inside CartoDB on the basis of “stay” identifiers. The choropleth is based on number of performances per city, from 1 to 18. I made the distribution uneven, because there is a much finer gradient of performances in the lower numbers than in the upper, and therefore the difference between 1 and 2 performances seems more significant than, say 15 and 18. The cities with null values are white with a 50% opacity (they were only passed through in transit). I’ve also added labels that appear on a hover and list the city name and number of performances for the cities in which performances occurred, although they are currently blank for transit cities.

This composite map is useful in how it begins to pull the pieces together. Montevideo, for example, suddenly appears very important as the only location not “on the way” — compare this with the one-night stands in Vina del Mar near the water, or Manizales along the rail journey. The addition of certain transit (non-performance) cities also begins to flesh out a more circuitous journey, such as the transition in Callao from boat to train between Valparaiso and Lima.