I am redoing the relational map from Mapping Tours through the Dancers’ Eyes for the article that I’ve written with Harmony Bench on “Mapping Movement on the Move: Dance Touring and Digital Methods,” which is forthcoming in the Theatre Journal special issue on digital methods. This involves updating the dataset, and also clarifying the map-based visualization. I’ll detail the changes involved, but if you want to look first and read later, then here is the link.

First, I wanted to get more granularity from the pseudonymous manuscript, “Old Granny Spreads Goodwill.” One step of this was characterizing the associations themselves, so that the results can later be filtered. Dancers are comparing places to one another, but they are also making associations to places in other ways places, for example by means of people they meet. The new dataset includes such types as “PlacetoPlace,” “PersonMetOrigin,” “Reference,” and “Language.” I am still bypassing associations made to the factual history of a place, although this is complicated because I am have chosen to include certain associations where, for example, colonial histories impact experiences of everyday life in the present. These are then given two further annotations. The first is “weak” versus “strong,” signifying the difference between a reference made offhand in passing versus one that is very particular. The second, where appropriate is “negative” versus “positive,” in other words whether the association is based on likeness versus unlikeness.

Rebuilding this dataset reinforces the promises and limitations of looking at an archival document in this way. Something I had not spotted before is that the full dataset contradicts one of the claims within the manuscript from which it is built. The author William Dollar observes that the travelers go for long periods of time without thinking of World War II going on simultaneously in Europe. This has always struck me as a reminder of the ways in which I am relying on his singular voice to report for a group, in particular because two of the dancers were themselves now-stateless Germans and unlikely to be disconnected in the way that Dollar represents. However, once I catalogued all of the different types of connections, references to Germany appear more than any country other than the United States (and it’s a close second). At the same time, something that becomes clear is how the local tends to be less marked. For example, there are ongoing references to the Spanish and Portuguese languages, but these are so ubiquitous that it is difficult to tie them to a place in the same way that I can with French or Russian.

The second goal of this redoing has been to clarify the map-based visualization, in particular how the associations catalogued by the dataset become visible. One of the things I am currently grappling with is how to represent the difference between a reference made to a very specific place, say the Paris Opera, versus one made to a country or even continent. For this, I am exploring the possibilities of using polygons, or alternately varied ways of representing the endpoints of the line strings. Likewise, I am interested in making visible certain of the additional parameters, such as the strength or weakness of connections, which can represent the relative difference and weight of various associations as points of reference. This also includes being able to filter the associations by type, such as people met, which 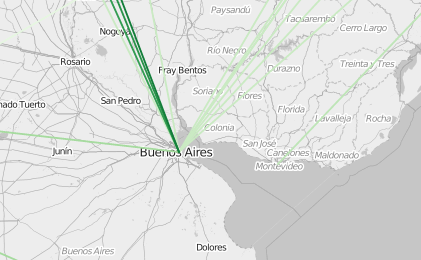 will help to particularize the ways in which this relational map is being held together.

I am working with cartographer Eric Sherman to find ways to make clearer the narrative that is being visualized by the lines that I previously drew as part of the earlier, poster-form map. If one of the most important takeaways of the original map was how the dancer’s frames of reference changed along the way, then this is best visualized in a time-based manner. For this we are exploring animation, as well as other means to demonstrate the directional flow of connections. (One great model I’ve been thinking about for direction is Tim Tangherlini and Peter Broadwell’s GhostScope). One of the early experiments involved numbering parent nodes from which associations are being made chronologically, and then gradiating the lines radiating from them, so that connections drawn from the earliest stops are lightest, while connections from later stops become increasingly dark. For example, in the draft image above (zoomed in on Buenos Aires), the lightest lines are the associations made while dancers are in the city, whereas the various shades of darker lines come from later cities for which Buenos Aires functions as a child node, beginning with Santiago to the west.

Check it out! Clicking on the map will also open the interactive visualization in a new browser window.

Finally, this is not for the Theatre Journal article, but one of my questions all along has been how a document like this silly manuscript might help us to skew representations of the world as a whole, in order to depict it from the traveler’s perspectives. To this end, Eric recently sent me a sketch for a different way to visualize the association dataset. If you look at the blue and yellow image below, you’ll see that what he has done is to generate polygons defined by borders that connect each parent node and all of its children. The idea is to show the total global space that is more and less encompassed by Dollar’s frame of reference for the world, location by location. The image at the top of this post uses the cumulative effect of all of these polygons to illuminate a world map. On one hand it offers a reminder of just how much of the world map is touched in some way by this small South American tour, but on the other it also serves as a reminder of all of the places that remain in the dark for Dollar.

Ps: just in case you haven’t seen enough things, I made a little network graph in Palladio that connects parent nodes to most of* their child nodes’ coordinates. (*Palladio requires latitude and longitude to be flipped, so these are only the locations that are recognizable when reversed, so I didn’t have to reformat my whole dataset).